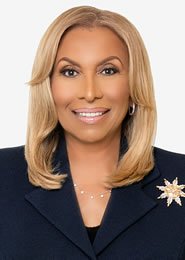 FULL-SERVICE | AWARD-WINNING STRATEGY | PERSONAL ATTENTION | SUCCESS YOU CAN MEASURE
McMillon Communications, Inc. is a full-service marketing communications agency based outside of Washington, D.C. in Fort Washington, Maryland. Led by Doris McMillon, one of the top media training consultants in the United States, the woman-owned, minority business has served government agencies, non-profit organizations and Fortune 500 corporations with award-winning campaigns and measureable success for more than 30 years.

The agency offers a variety of communications services from dynamic graphics and brand management to community outreach and media placement. The firm is noted for its personalized service and attention to detail. Doris McMillon is nationally renown for her expertise in key message development, media interview training, executive presentation coaching, image branding, and customer service training and facilitation.

A gifted speaker and a noted Mistress of Ceremonies, McMillon has educated, entertained and inspired audiences at scores of seminars, conventions and gatherings across the country. As a speaker, she has enthralling personal stories to tell of her search for her birth mother and her spiritual awakening. As an EMCEE, she adds polish and quality to event presentations and ensures smooth flow from start to finish. As a spokeperson for your organization or company, she lends a lifetime of integrity and honesty to your program or campaign.

The McMillon Team has decades of experience in training, reaching and motivating diverse audiences. Let us put our knowledge to work for you! 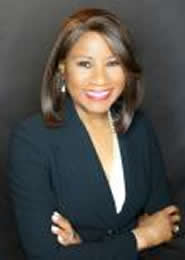 Audrey Easaw, Branding, Customer Experience and Marketing Strategist, has a successful track record of leading organizations through transformational change. At McMillon Communications, she provides program operations and strategic partnership expertise in the B-to-B and B-to-C space for clients.

As Corporate Engagement Management Director for AARP, Easaw worked with leadership across the organization to ensure alignment on membership programs and initiatives presented to AARP’s Board of Directors. She helped launch the AARP Experience, which included developing a strategic marketing plan and an employee engagement strategy to ensure enhanced interactions with members. 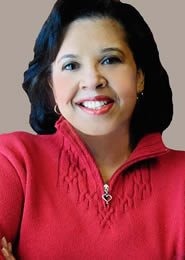 Roy has worked on public relations programs for Rutgers University and for the United States Departments of Agriculture, Defense and Labor. She has also worked as an editor for the New York Times Company’s Regional Media Group and for the Atlanta Daily World newspaper.

She has been the owner of an Atlanta-based marketing communications agency with more than 20 employees, where she designed hundreds of grass roots promotions, special events, public relations and community relations campaigns for such clients as Procter & Gamble, Coca-Cola USA, Sara Lee Corporation, Nike, Johnson & Johnson, McDonald’s, and Citibank. 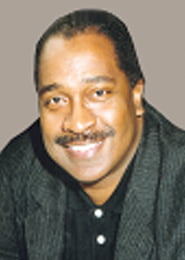 David Burnett is a Communications Strategist with McMillon Communications, Inc. His vast experience as a News Anchor/Reporter has positioned him to be a skilled media trainer, content coach and producer. He helps executives and other spokespersons conduct better interviews and take on the media with poise and confidence, with messages that impact the audiences they are trying to reach.

David’s work as a media trainer and coach comes after a distinguished, two-decades long, career as a broadcast news reporter and anchor. He won more than a dozen awards, including the prestigious Emmy Award, for his reporting. The last thirteen years of his news career were spent at WTTG-TV in Washington, D.C. where he reported a wide range of stories from local and national politics to feature stories. David also developed and coordinated the reporter-training program at WTTG for aspiring journalists.

As a former journalist, David understands what reporters and other interviewers are looking for and he knows how to deal with their tactics and share that insight with our clients.

With David’s assistance, spokespersons learn to conduct better interviews and take on the media with poise and confidence.
David also produces thoughtful and creative videos that tell powerful and effective stories for his clients.

Among those he has worked with, David has trained numerous managers at the FDIC and the Office of the Comptroller of the Currency, helping them to shape effective media statements during a time when public confidence has been shaken by increased numbers of bank failures and economic uncertainty. He has also provided media training to some of the nation’s top state bank examiners. He has also conducted media training sessions and produced videos with the NAACP Legal Defense and Educational Fund.

David is also an educator, serving as an adjunct journalism professor at Howard University in Washington, D.C. David is a past president of the Washington D.C. chapter of the National Association of Black Journalists.

David is a native of Indianapolis Indiana. He earned a B.S. degree in Communications from Ball State University in Muncie, Indiana. 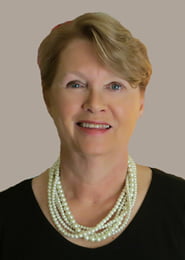 Louisa Hart is a Media Strategist with McMillon Communications, Inc. Hart provides deep and varied expertise in speaker training, media training and targeted media outreach for her clients in both the public and private sectors. She started her career in broadcasting, first at NBC’s Meet the Press, and she subsequently was a news producer for WJLA-TV, the ABC affiliate in Washington, D.C. She has published in a variety of print outlets, including the Washington Post and the Christian Science Monitor. In addition, Louisa founded the Department of Broadcast and Video Services at Porter Novelli, Inc., a multi-national public relations firm, and was Executive Vice President for Operations at Equals Three Communications.

Louisa has served as a strategic consultant and media trainer for Fortune 500 companies, government agencies and nonprofits. They include the American Diabetes Association, the National Institutes of Health, Celera Genomics, the World Bank and International Monetary Fund, the Food and Drug Administration, Princeton University, Kellogg, PhRMA, Johnson & Johnson, and Procter & Gamble. Her work focuses on helping clients to formulate and deliver memorable media outreach messages that will resonate with and motivate their target audiences. She has conducted training for clients who are appearing on major network programs such as ABC’s World News Tonight, and the Today Show. She is equally as adept at designing outreach that will impact specific print media markets and websites. 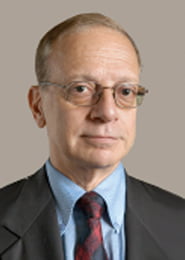 Peter Restivo is a top Communications Strategist with McMillon Communications, Inc. He has been Senior Producer of ABC-TV’s Good Morning America. He is a four-time Emmy Award winner for his work at ABC-TV; as founder and Executive Producer of PM Magazine for Fox’s New York flagship station; and for a special produced for Post-Newsweek. He won the 1986 Emmy Award nomination for best writing in a television special. His TV Baseball Cards series for Hispanic television has been widely syndicated.

He was founding Associate Program Producer for Westinghouse Broadcasting’s national Evening-PM Magazine. His credits as producer and writer span posts at KDKA-TV, Pittsburgh; ABC-TV, New York and other major television and radio stations.

He won two of his Emmy Awards as Executive Producer of New York’s prime time PM Magazine and guided the show he started to four additional Emmys. His third Emmy was for producing Elvis – Love Him Tender with Joel Siegel for ABC-TV and the fourth for They Came To America with Larry King for Post-Newsweek Stations. He has received awards from the International Film and Television Festival of New York, Art Direction Magazine and the Pittsburgh Press Club. His 1986 Emmy Award nomination (national) for best writing was for the very successful, nationally broadcast Soap Opera Special (Linda Ronstadt’s 1989 Grammy winner, “I Don’t Know Much,” is from this hit show).

Mr. Restivo was the first to realize the potential of an information series based on the phenomenal success of serial drama. His widely syndicated Soap Spot series for King World Productions ran nationally for three successful years. He created America’s first daily show on the subject, Soap World, for King World Productions. Recent projects include TV Baseball Cards for Telemundo/Coors Brewing Company and Tom Morgan’s MoneyTalk. Mr. Restivo published a monthly newsletter, Television/ Radio Newsletter, and writes extensively for free-lance clients including the National Academy of Television Arts and Sciences, the International Film and Television Festival of New York and publications such as New York Magazine, Campaigns & Elections, Communication World, Public Relations Journal, Communication Briefings, Backstage/Shoot, and TV Technology. He is a contributing author to the college public and media relations text, “The Believable Organization: An Introduction to Communication Management,” and has appeared as spokesperson for a number of media clients. He is the Broadcast Media columnist for PRCanada, Canada’s monthly public relations eZine. 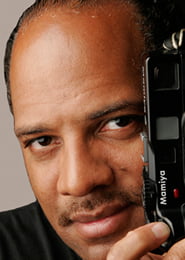 By the mid-1980s, not long after his graduation from Howard University, Louis was introduced to the Washington political establishment by attorney Amy R. Goldson, General Counsel for the Congressional Black Caucus. Again recognizing a unique opportunity, he began pursuing political and corporate accounts while, at the same time, capturing lasting images of national and international political figures including such icons as Desmond Tutu, Nelson Mandela and Barack Obama.

He is a contributing photographer to Getty Images, Inc. and WireImage.com, the world’s leading agency for celebrity and entertainment photos. His personal catalogue, stocked with images of celebrities, corporate moguls and political heavyweights has been labeled “photo gold.”

Louis Myrie graduated from Howard University in 1984. He holds a BA in Radio, Television and Film. 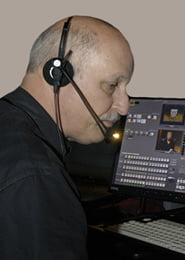 Frank Beach has more than 40 years’ experience as a writer, producer, director, editor, instructor and communications strategist. He is fluent in the media of film, video, television, interactive media, theater, and experiential and special events. Frank is a pioneer in the production of live interactive satellite events and webcasting. His creative efforts and contributions to the industry have earned him numerous leadership, production and publication awards.

Frank’s formal training includes broadcasting, journalism and theater, with a minor in music and extra-curricular study in circus arts and instructional design.

On the job, he has gained extensive hands-on experience in the art and science of experiential event staging, interactive content development, and strategic organizational communications. 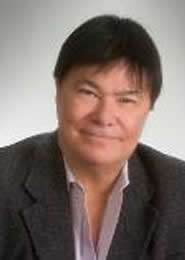 With delivery approaches which have ranged from traditional stand-up training to video, self-paced, and creative eLearning approaches; Mr. Loggie has provided clients with the most effective strategic approach to delivering the right solution to the right audience in the best way.

Mr. Loggie graduated from the University of Texas (Austin) with a BBA in marketing.